We are here to give you the 4-1-1 on bee control in Houston, Texas!

Now, that objective can be reached through awareness in the community; educating people of the benefits Bees in Houston give to us. We are have symbiotic relationship, because we care for them and they give us bee honey, and make sure that vegetation and plants will grow all around us. And we must respect that relationship by enforcing Bee Control in Houston.

So, if we go a little bit deeper in the definition of bee control in Houston TX, we can see that bee control has three stages in which attention from everybody must be directed. We would say that the first one is prevention, and of course, what better policy to follow than the one that helps us to avoid threats way before they turn into real trouble. And when we talk about bees, prevention is just your concern to make sure that every single corner of your house is clean, checked and that you have been looking for bees and don´t see them that often. Of course, bees will be everywhere, but when you have a Bee Hive Houston at home, you will definitely feel that something’s wrong, and the immediate step after that is trying to find out where that bee hive is. Now, if you find it, you just have to call the Houston number in BeeRemovalSpecialist.com and we will take care from there in the most efficient and environmental manner. If you don’t, but are almost sure of being invaded by Bee in Houston, the same call will be just fine to make sure you are bee-free. And that is prevention. This is all necessary once or twice a year, because you are preventing bees from invading your house, so no killing or extermination has to be done.

That is Bee Control in Houston Texas, and that is what we are dedicated to as a company.

If you have a bee problem, do not hesitate to call! We are here to help. 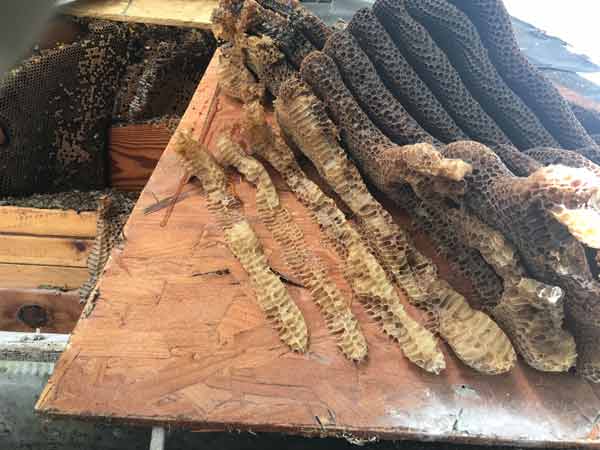 The Structure of a Beehive

Every home is structured in a certain way, the living room has a couch, the kitchen has a stove and the bed has a bedroom. The same goes for a beehive, in their family everyone plays a role, and everything has a place.

Each bee has a responsibility that they oversee. There are 4 types of honeybee roles, the queen, the drones, the workers, and the brood.

There is only one queen in the entire hive, she lives anywhere from two to three years on average. Her duty is to lay fertilized eggs, she is the only female in the hive who can reproduce. She regulates and controls the rest of the bees in the hive.

Drones are the males of the beehive; their role is to mate with the queen and offer their genetic diversity. Their role is essential for keeping the hive alive by reproducing, in the summer and spring is when it is important. Come winter, they are kicked out to preserve honey for the essential workers for the long winter ahead.

Worker bees are all female and they have the most work to do. They clean the cells, collect pollen, produce honey, feed the other bees and the list goes on. Given the name, they essentially work from their birth to the end of their life.

The babies of the hive are called brood, these are the eggs, larvae, and pupae. They will not emerge from the brood cells until they are mature and begin their contribution to the rest of the bee colony.
When looking at a beehive it is too recognize and see where the brood is, and honey are. They are separated into their own areas.
Look at the photo above and see if you can distinguish the different parts.

Bee Removal Specialist were called to remove bees between the first and second floor of a home. The homeowner became concerned when the bees began appearing next to a bedroom.

The bee removal team removed the bees from the siding avoiding any damage to the interior of the home. They successfully removed the queen, drones, worker bees and brood. Then they sanitized the area to remove the pheromones that attracts other bees, applied bee repellent, insulated the treated area, sealed the hole and applied another layer of bee repellent.
Bee Removal Specialist provides a 1-year warranty for a live bee removal with repair.

1. Do you have experience removing bees from a wall?

Removing honeybees from a wall requires carpentry experience. A novice beekeeper can cause more damage than good if they are not experts in carpentry.

2. What is the process of removing bees from a wall?

An experienced beekeeper will identify the location of the bees with an infrared camera, use a smoker to calm the bees, use a bee vacuum and other professional tools to remove the honeybees safely, extract the hive, clean the affected area, apply pesticide to deter honeybees from returning to the empty hive, fill the open area with insulation and replace the wall with the original material whenever possible.

3. Do you have pictures of honeybee removals from walls?

Trustworthy honeybee removal companies will have plenty of pictures. Choose a company that has more than just a few examples.

4.How long have you been a beekeeper?

Because there are many species of bees, a beekeeper must have extensive knowledge of the different techniques to safely and effectively remove the bees.

5. How long have you been in business?

Make sure they have a valid business license and have many years of experience in the bee removal field.

6. Do you have references?

A reputable bee removal company will have good ratings online on platforms such as Google. Be wary of businesses that have too few good reviews. Itâ€™s not unusual for novice companies to ask friends and family to create favorable reviews.

7. Do you guarantee your work?

Read the warranty or guarantee agreement carefully. A good bee removal company will warranty a removal requiring a repair for at least a year.

8. Do you have insurance?

Some companies operate with little or no insurance. Companies should have both liability and workmanâ€™s compensation insurance. This is a good precaution against accidents caused by bee smokers causing fires or beekeepers falling from roofs or trees.

5 Things to Know about Wasps

Topeka Drive, Fort Worth, Texas 76131 When it comes to dealing with wasps or a wasp nest, these tips might be especially useful in an unpredictable situation. Bee Removal Specialist can help with bees, wasps, hornets, and any kind of nests that you find in your area....
Read More

Do Not Kill Wasps or Bees Yourself – Call a Professional

Customer Location: Glen Eden Drive, Fort Worth, TX 76119 Most of the time our customers try to handle a wasp nest themselves. They end up being stung and hurting themselves. People even try getting rid of the bees but end up...
Read More

Customer Location: Hand Road, Richmond, TX 77469 Trailers have many purposes and uses, one of them can be for storing honey. Bee Removal Specialist dispatched our bee removal experts to rescue this monster hive from the trailer. This massive hive has been building for...
Read More

2020 has been one crazy year, what is even crazier is the introduction of the “murder hornets” also known as the Asian Giant Hornet (Vespa Mandarinia). They are the largest in the world, on average they can get up to 2-inches long and have a 3-inch long...
Read More

The Process Of A Live Bee Removal

Customer Location: Tokalon Drive, Dallas, TX 75214 7/21/2020 Giant Beehive Removal In Dallas, TX Thousands of bees were rescued in the University Park neighborhood thanks mostly in part to a savvy environmentalist. The ecofriendly customer insisted on a live bee...
Read More

Customer Location: Sun Valley Drive, Dallas, TX 75216 7/17/2020 Monster beehive discovered in the eave of a local residence It is estimated that over 30,000 honeybees were removed from the eave of a residence on July 17th, 2020. Following discovery of bees moving in...
Read More

Discover How To Get Rid of Bees From Professionals

4 How to Get Rid of Bees – Do’s and Dont’s.
DO call a professional immediately.
This is the single most important step of bee removal! If you have a bee problem, it’s imperative that you use a professional bee removal expert to fix the situation for you. Their experience, knowledge and skills enable them to effectively remove the bees, quickly and safely, ensuring that no one gets hurt…